When a client sent me a note of frustration about failing to craft well-written chapters for his book, we both identified “perfectionism” as the problem. Beware! Striving to be perfect on the first draft can crush your creativity before you’ve barely begun. 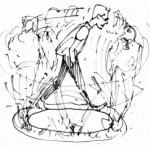 Frustrated with writing a first draft?

Still, what can you do to compose that initial draft as creatively as possible?

My response relates to prioritizing the focus more than applying any special techniques. That requires you to shush your inner critic as you let your ideas flow.

Here’s what I suggested to my client. See if it fits as you craft your initial draft.

Main point: Don’t let tone/style concerns stop you from letting your ideas flow as you write. You (and your editor) can adjust them in the third and fourth and fifth revisions.

Focus first on what you know best; after all, you’re the content expert.

What is most frustrating for you when you get started?

“I could certainly identify. When I was writing my first draft for How to Write Heartfelt Letters to Treasure, it took SUCH discipline, being a freelance copyeditor, NOT to revisit what I’d written, and NOT to copyedit as I wrote! I had to keep reminding myself that the first draft was, as you’ve just written, just to get my ideas down as completely as possible; that fine-tuning could come later, in my second and third drafts.”