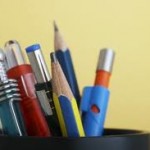 by Barbara McNichol “I’m not expecting Shakespeare.” Your boss or colleague has probably said something along … END_OF_DOCUMENT_TOKEN_TO_BE_REPLACED