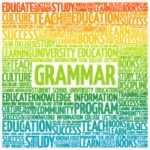 What is grammar? It encompasses the words you choose, how you string them together, and how you punctuate them to give them meaning.

To recognize National Grammar Day, which falls on March 4, this post examines 11 sentences that demonstrate why grammar matters. I point out the grammatical errors in each and offer a suggested rewrite.

Examples are the best teachers.

1) Just today, we actually got a press release that basically said that CreateSpace was disbanding their author services part of their business.

Problems:
Just, actually, the first that, and basically add nothing to meaning or clarity.
CreateSpace is a single business entity, not a “their”

Rewrite:
Today’s CreateSpace press release announced that it will disband the author services part of its business.

2) I personally actually travel a lot, so I plan to bring this alarm clock along with me everywhere I go!!

Problems:
Personally, actually and along add nothing to meaning or clarity.

Rewrite:
I plan to take this alarm clock with me in all of my travels.

3) Eric was told not to go by his boss, ostensibly because he was working too much overtime.

Problems:
“By his boss” could be interpreted as “close to or in the vicinity of.”
It’s unclear which he was working too much overtime.
Ostensibly, which means apparently or purportedly but perhaps not actually, can be more succinctly expressed.

Rewrite:
Eric’s boss told him not to go because of what he considers Eric’s excessive overtime.

4) After briefly mentioning an official’s alleged affair with his staff member earlier in the week, Stephen Colbert took a deep dive into the story Wednesday night.

Rewrite:
Early in the week, Stephen Colbert mentioned an affair between an official and the official’s staff member. Colbert delved into the story Wednesday night.

5) Nestled in your opulent guest room with luxurious bedding and special amenities, the Drisco’s thoughtful staff will be there to anticipate your needs and carry out your wishes.

Problem:
Drisco’s thoughtful staff members are not nestled in your opulent guest room.

Rewrite:
As you nestle into the luxurious bed of your opulent guest room and enjoy the Drisco’s special amenities, responsive staff will anticipate your needs and carry out your wishes.

6) Right after we got off the train we were trying to get our bearings and two lovely Chinese girls asked us if we needed help in excellent English.

Rewrite:
Right after we got off the train and were trying to get our bearings, two lovely Chinese girls asked in excellent English if we needed help.

7) After speaking to residents, the stranger discovered that animal rescue teams had been attempting to catch a feral dog that roamed the area for five long years with no success.

Problems:
The feral dog had not experienced a lack of success as it roamed the area for five years; those on the animal rescue team had no success in catching it.
What is the difference between five long years, five years, and five short years?

Rewrite:
After speaking to residents, the stranger discovered that animal rescue teams had been attempting — without success — to catch a feral dog that had been roaming the area for five years.

8) Since language is fluid, does it follow that all new usages, since they are not incorrect, can be used in business settings?

Problems:
Since (used twice) means from then until now.
A double negative — are not incorrect — in nonstandard English.
Can traditionally implies ability; may implies permission.

Rewrite:
Because language is fluid, may all new usages — although not yet universally accepted — be used in business settings?

9) The reason why they were furious was because the products Pauley mentioned are half the price and twice as effective as theirs.

Problems:
Reason why is redundant.
There’s a missing preposition: half the price of

Rewrite:
They were furious because the products Pauley mentioned are half the price of and twice as effective as theirs.

10) The report does not dispute that Trump fired Comey because he was unhappy with his continued pursuit of the Russia investigation.

Problem:
He and his are ambiguous: to whom to they refer?

Rewrite:
The report does not dispute that Trump fired FBI Director Comey because the president was unhappy with the director’s continued pursuit of the Russia investigation.

11) When I first mentioned my idea of writing a memoir to David Carr, he told me that I needed to “visit a foreign land where writers live.”

Problem:
The writer was referring to her own memoir, not one about the life and legacy of David Carr.

Rewrite:
When I first mentioned to David Carr my idea of writing a memoir, he told me that I needed to “visit a foreign land where writers live.”

If you don’t pay attention to words, their order and how they’re punctuated, readers might not understand what you’re trying to convey. Mastering grammar makes for clear communication. Consider this resource:

Grammar for People Who Hate Rules: Killer Tips from the Ruthless Editor

Grammar is not a set of rules carved in stone; it’s a collection of guidelines that help you communicate clearly.

How will you celebrate National Punctuation Day? Share your ideas here.